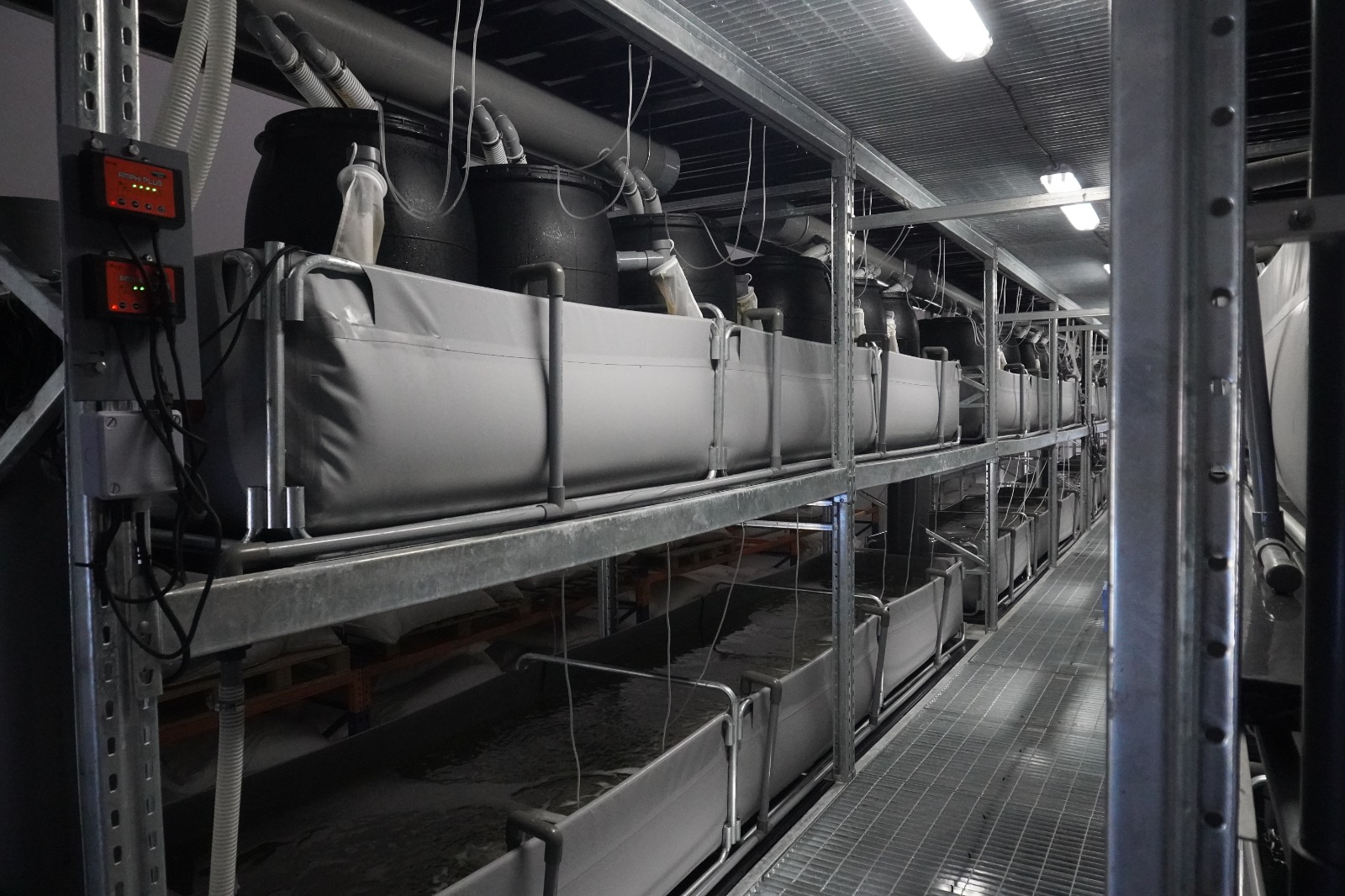 The cooperation between the two companies comes at a time when Singapore is pursuing the goal of 30% home-grown food by year 2030. The roughly 730 km2 city-state heavily relies on imported food due to its relatively small land available for food production, which effectively reaffirms the importance of intensified production to satisfy the food demand of its growing population.

In UniAqua’s six-tier system, shrimp are farmed in stacked units with juveniles at the top level, and grown-ups at the bottom waiting to be harvested and shipped to the market. The combination of recirculation, biofloc and mechanical filtration ensures that the farming environment remains stable and secure while minimizing energy consumption.

“With a vertical indoor system of such high density, every parameter’s impact is magnified,” said UniAqua CEO Jeremy Ong. “Hence, we designed the systems to be especially modular and systematic with the intention to incorporate IoT and machine learning within our operating system to ensure scalable efficiency. A major component would be the feed that we put in the tanks—how soluble they are, how receptive our shrimps are to them, the residue left and other aspects like taste profile. We are really excited to see how this partnership with Grobest will help to bring us closer to the optimal feed.”

This intensive aquaculture system requires safe, antibiotic-free and highly palatable aquafeed with the least possible leaching to further streamline the process and remain at the apex of innovation. Grobest will work closely with UniAqua to develop next-generation feed that is tailored for this particular model to facilitate all its technological advances.

In announcing the partnership, Grobest Group CEO, Samson Li, stated “We are looking forward to working closely with the UniAqua team to develop the world’s first Functional Performance Shrimp Feed specifically formulated for RAS systems. Grobest has always led innovation in the aqua feed industry since the introduction of our proprietary bio-tech Functional Performance Feeds over 15 years ago. Making our farmers more successful, more productive and more profitable across all farming models is the essence of ‘The Grobest Difference’ and is why this partnership with Universal Aquaculture is an exciting next step that reaffirms our comittment to leading the industry by partnering with other leading innovators. The development and expansion of new farming models, such as UniAqua’s proprietary Hybrid Biological Recirculation System™ will be critical in the development of the industry over the next decade and it brings a unique set of challenges that urgently need a solution.”

About Grobest Group:
Grobest was founded in 1974 in Taiwan and has since expanded its operations to China, India, Indonesia, Malaysia, the Philippines, Thailand, and Vietnam. Grobest is a pioneer and technological leader in an array of innovative and differentiated functional performance feed products, focused on preventing and combating diseases as well as increasing yield. Furthermore, the company provides a full range of services and technical assistance to farmers throughout Asia, including pond maintenance, water treatment, and soil and disease testing.

Fish and vegetable farming has already gone high-rise in land-scarce Singapore. Now, another type of farming has gone vertical.

When the first harvest from Universal Aquaculture’s Tuas South Link facility is ready come June, the sweet, juicy flesh of live vannamei prawns will be much easier to get hold of.

For a start, the farm will be able to produce between 150kg and 200kg a day of the crustacean – also known as Pacific white shrimp, white-legged shrimp, king prawn, or bai xia. [Full Story: The Straits Times]

OCEANUS Group has invested an undisclosed amount in Universal Aquaculture, a newly formed deep-tech company with an indoor farming facility.

Through this investment, Oceanus will focus on breeding Vannamei prawns, said the seafood and fast-moving consumer goods value-chain manager in a regulatory update on Saturday. [Full Story: The Business Times]

Singapore is set to receive a local boost from a high-tech farm in satiating its appetite for prawns. [Full Story: The Straits Times]